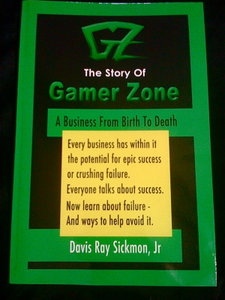 Buy A Damned Book Already!
OK, just kidding.  But, The Story of Gamer Zone is now in print.  In about 15 days you’ll be able to pick it up at Amazon.com, or you can buy a copy now if you really want at CreateSpace:
The Story of Gamer Zone (softback)
Or available for Kendel (already on Amazon, oddly enough)
The Story of Gamer Zone (Kendel)
Or for other various book readers, including Palm, Windows Mobile, Windows, Mac, your toaster, etc.:
The Story of Gamer Zone
Cool.  Not an awesome book, or an amazing book, but a book. One of those “I did it” kind of accomplishments. And yes, that’s a photo of the cover. I could have just cheated and used the original source files, but a photo of it seems a little more… real.  Anyone can mock something up in Photoshop 🙂  (OK, and my opinion these days is now anyone can write a book too.  Just takes a little time.)
There’s still one more version to go – the iPhone version will be done in a bit, though, could be as long as two MONTHS before it hits shelves there. *SIGH* Apple doesn’t move very fast on non-video game Apps for some reason.
I’ve still got one more “surprise” piece of marketing material for the release of the book, but that’s a few weeks down the line still.
Next job? Marketing. Already starting on that a bit. Also helps that in recent months I’ve made some connections at TV stations and news papers around town 🙂  That and I’ve got a book signing that I’m planning that will help a bit – I don’t even have to run around and put up posters for that though, which brings me to my next topic…
Fountain Street Productions and Me
Another interesting success along the way.  When Fountain Street Productions was about a month out from it’s public launch, I threw them a proposal that turned some sweat equity into ownership.  After the launch, which was fairly successful (18,861 page hits the first month with NO advertising), Jason, the founder, and I had breakfast.  The proposal was accepted – I’m one of the owners now.
Fountain Street won’t make me money.  That’s not what I’m up to.  It’s about connections, securing permanent development services, some ego, and being able to pimp projects like The Story of Gamer Zone more effectively.
They are already planning their first concert event in March – I’m looking forward to this, since I get to see the event from the other side of things, rather than just an audience member 🙂
Social Networking Might Work TOO Well…
So this weekend I’m dead broke.  I had an invite to an event on Friday. Then got a second invite.  Then a third. All of which I couldn’t go to.
Then Saturday I got another invite, this time “PLEASE go – we’ll buy the drinks!”.  And while doing that one, I got another invite again.  And of course on Sunday, I went to Heather’s BDay party (hope you enjoyed yourself!)
So on a weekend I was dead broke, I managed to go out and have a good time after all.  Brandon’s wife Christy was having her birthday on the 31st, and wanted me to go to keep her hubby from being an anti-social stick in the mud.
Now, there was some interesting events that occurred.  I watched some poor bastard get his ass knocked out there at the Loft 150.  He was talkin’ shit to Brandon, and Brandon just told him “Look, we’re all having fun here, let’s keep it that way. Just walk away.” and he did. Then he started messin’ with the girl I had been hitting on a bit, and after being blown off by her, decided he was going to prove how manly he was “Watch this – I’m gonna go knock that guy out.”
This guy was pushing 400 lbs.  I just happened to be headed for the restroom when he made his move (unknown to me) – all I saw was this 400 pound jerk stumble backwards, about to crush a 5′ 0″ blonde.  I stuck my arm out to stop him, but the mass inequality was too great.  He crunched her a bit against a pillar. I set my feet, and gave him a one arm heave that pushed him off the girl…
And right into three guys who all took a swing simultaneously. Only one connected, and that was enough – out like a light. I didn’t know the back story that he had been out picking a fight on the dance floor with a guy who was about 150 lbs – or that the two friends with the guy all took exception to it. I was just tryin’ to rescue the blonde.  Oops.  I checked him out from afar while he was laying on the ground “Yep, he’s breathing. Got a split lip, swollen eye, but nothing life threatening. Screw him – I gotta go piss.”  OK, I’ll rush into an accident to check on people, but some ass wipe who brought it on himself? Well, he can wait for paramedics.
Took a crew to move his fat ass, strapped to a gurney. They didn’t strap his arms down until he took a swing at the paramedics.  They managed to get one arm down when he took a swing at the cops.  Yeah, welcome to jail time, dumb ass.
And of course, I got to spend time flirting and re-learning old social skills (like, ya know, meeting women.)  A fun time was had by all.
Time ta’ go do some marketing work, so I can start trumpeting the release of The Story of Gamer Zone from every high tower I can find 🙂

Talk to me (and everyone else) by commenting! Cancel reply

This site uses Akismet to reduce spam. Learn how your comment data is processed.